I studied propaganda at university during my anthropology degree.

I was fascinated by it.  Look at the TV in the last few days (or decades for that matter)…you’ll see it.  EVERYWHERE.

You want to know how to recognise it? That’s easy.  It’s primary purpose is fear and hate.

It’s screamed from the mouths of politicians who can’t make a logical argument and who rely on:

As the bombs drop upon the people of Syria again, I feel like the word is swamped in the propaganda of WWII once more.

The impact is a humanitarian crisis, which in my humble opinion, is bigger than the world has seen in human history.

If you are still here, in the moment where you can recognise hatred and call it out – good for you.  I applaud you.  I’m still here, despite it all.  I’ll still call it out.

So I wrote this poem today:

When we will stop glorifying the political wars of angry men?

When your home is bombed and children dead, maybe then?

It seems that if history has anything to say this won’t be the case, 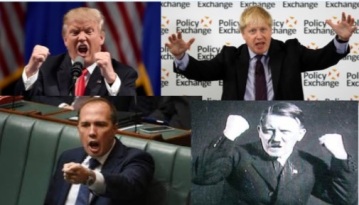 killing more than those who idolise it’s angry waste,

The dogs of war are personified in their televised angry faces,

Hatred makes no distinction between culture, creed or “races”.

Rotting your brain, tapping into a source of the most primal hate,

Turn off the TV, rally and lobby peacefully before it’s much too late;

Take away the power of their vitriol and focus on your community.

Volunteer, protest and find ways to give the affected hope and dignity.

I’m not the greatest of poets.

But today I had to write something.