So, coming up is International Day of People With Disabilities. And for me it’s also my 50th Birthday.

Here’s a list of gifts that would be nice:

I sit on the more socially acceptable side of this, being hyperverbal, but I do experience shut down and need more silence and then I am interpreted as rude when I go quiet for days at a stretch. I struggle with tone and pitch, I speak too fast and I get word order “wrong” (whatever that means). Modifying this is exhausting, not just metaphorically, but physically exhausting.

Most of my meltdowns are related to not getting enough solitude away from people asking me to speak – plus related to the hyperacusis and sensory processing pressures I experience. It’s still hard work for me to speak in a “socially acceptable way”.

It literally takes 10x more effort for me to public speak, because I am constantly modifying how I speak for a neurotypical audience, as a matter of survival in the arts world. Then people will still find a problem with it – and frankly I don’t care if they do.

I won’t mask for you, pretending to be neurotypical is harmful to me. I will try out new things that feel comfortable and I think I’ll sing more (because it feels better than this cultural obsession with punchline comedy). But I won’t mask for you.

And if it’s considered inappropriate, well isn’t everyone at some point? All this focus on speech assumes there is some standard way to communicate.

Speech is not superior to any other form of communication. And perfect speech or perfect non-speech doesn’t exist.

I actually have a formula for measuring gossip.  Yep.  You read that right.

Despite what you might have heard, gossip is not always bad (ha! see what I did there?). Gossip has been a way to bond for humanity and it’s what we do to connect.  It’s might be good to know you both admire Nicole Kidman’s movies but dislike her choices in men (or underwear or whatever).  If you don’t gossip it can be socially isolating and trust me this I know because I went through a period where I refused to engage because I didn’t get it.  But just as there is positive gossip, or what I call bonding gossip, there is negative gossip, something I will call malicious gossip.  These are my labels that I use to help myself deal with gossip.

As an Autistic person (this is the language for myself I prefer) I am very prone to getting “sucked in” to peoples conversations and getting stuck there. It’s no secret that that spectrum folk may engage in a conversation armed with their handy bag of small talk scripts they’ve learned or been taught as part of the mask used to fit in. But masking is not healthy for us, can cause us physical and psychological harm. The effort spent trying to see an endgame of small talk can be damaging to our different communication style that is hard wired to our unique operating system. Gossip is an example of small talk spectrum folk may struggle with, but apparently so do a lot of the rest of the population.

We may end up stuck in repeat conversations that make us uncomfortable and take too long to see malicious gossip, desperately trying to take the conversation somewhere else.  What can happen is that the person with malicious intent then sees me as an ally and I can end up with a sort of communication Stockholm syndrome.  Now in my late 40’s, I’ve ended ten year friendships in my late thirties that I reflect upon with utter shock that I stayed that long.  I don’t get the need for small talk or gossip intended to deceive in conversation to impress or for status, those of us on the spectrum prefer honesty and our conversations are content or topic driven, not connection driven.  We take a long time to connect and can get trapped with people around us we don’t really need nor want in our lives.

This is part of the reason why we might find ourselves hurt by false friendships, particularly as young people (“the hate and mate syndrome” – manipulated and hurt by friends), which is perceived as “running with the wrong crowd” while we really are being abused and manipulated. I’m not going into the how’s and why’s of this right now. For the moment, you’ll have to trust me (or click the links and do that emotional labour and educate yourself). And if you have that myth about no empathy and autism on the tip of your tongue…here…that link just there explains it nicely! We have bucket-loads of affective and compassionate empathy and yep…see that above again…

The key thing is that while neurotypical (NT) people might brush it off, we will process it differently and it will impact us more (leading to issues like shut down and burn out).  I often take until the sixth uncomfortable conversation to realise this person is going to keep malicious gossip up…and that they are not just needing support to deal with a difficult situation.  I don’t actually see the point of gossip and don’t enjoy it all, but I now recognise people use it to bond or divide and conquer, and perhaps a little in between.

I personally prefer interesting world history discussions, but there you have it.

I frequently use counselling to gain new conversation scripts as I get older and recently found that my counsellor benefitted from how I had come to understand gossip and encouraged me to write this post.  So here goes!

But first some geometry (of sorts!)…

Gossip is a form of triangulation.  Which can

be either bad or good.  A goes to talk to C to discuss B about an issue.

In conflict resolution triangulation is seen as a major cause of conflict when the A, B, C become the roles of persecutor, victim and rescuer and a cycle of drama ensues.

Yet the cycle can be broken by changing the dynamic of the triangle.  The Karpman drama triangle models present ways to do that.

I need to point out that the person A may genuinely need help to advocate for themselves – but the important thing is to break the cycle with any advocacy.   The Karpman model is something I constantly refer to in regard to malicious gossip.

A formula for measuring gossip

So at some point in my life I realised listening to the drama of malicious gossip too long was hurting me and I took actions to change the circle of people around me.  I knew that I often don’t read the intent of lies and manipulation until further into an interaction and I need a non-emotional logical way of measuring “gossip” that people might present me with.  I can boldly say I don’t have people who use malicious gossip around me now and life has never been better.

I use a formula to measure malicious intent.

Each is measured out of a possible score of ten and the total out of twenty is the GR.  The higher the gossip rating the more I avoid it or invoke the Karpman Drama Triangle.

Generally a score of over ten out of twenty invokes the Karpman interventions!  Or I just stop associating with the gossiper.

High scores in proximity means the person the gossip targets is close at hand, like a colleague or friend that both of you know well and this may be the time you question why they haven’t raised what they are with you – with the person themselves.  Similarly the more negative the content the higher the scores.

Higher scores mean…use questions about why and maybe use the Karpman drama techniques.  Or run the hell away if you can.

The score decreases as the distance between people increases and as the content is more like fluffy bunnies or helpful conversations or general chit chat.  Because let’s face it, a conversation about Drew Barrymore’s shoe choices from someone in Australia is not going to hurt anyone.  Well I hope not. I suppose it could if you were committed to copying her shoe choices…but I digress…

And lower negative content scores with high proximity might have touches of issues and choices and ways to care for one another that can’t be had with the person in someone seeking support.

Here’s a handy chart as to what it looks like.  It probably best tells the story!  All of these is obvious for some people, but not me. And over the years this was my Dr Spock logic for it. It helps me stick around positive, kind people and stay away from nasty drama. 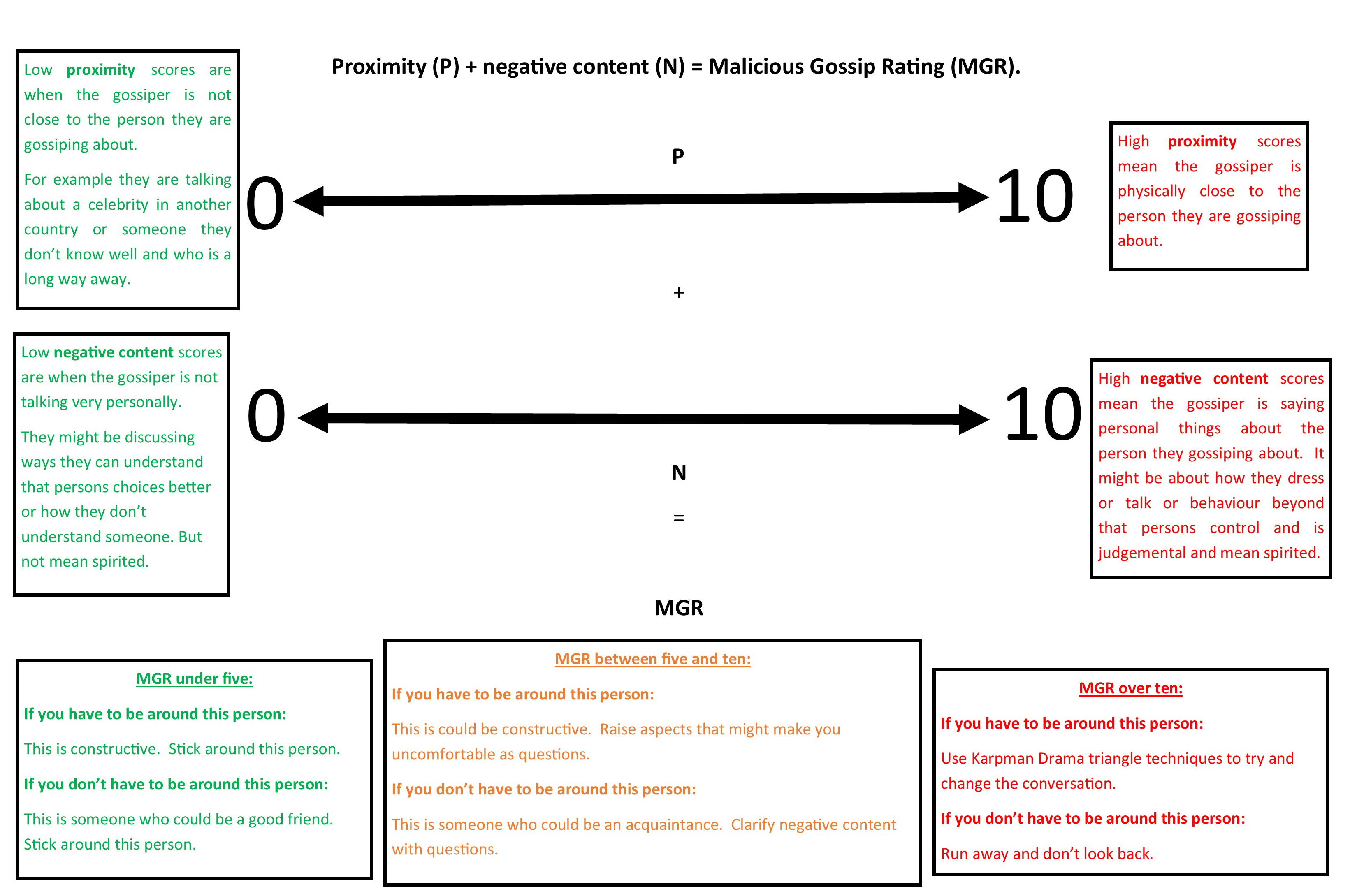